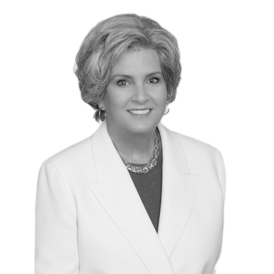 Susie Wiles is a Co-Chair in Mercury’s Florida and Washington, D.C. offices.

Served as a lead advisor on multiple presidential, gubernatorial and state campaigns.

Served as the Florida strategist for the 2016 and 2020 campaigns of President Donald J. Trump.

Currently resides as chair of the Save America PAC.

Susie Wiles is a Co-Chair in Mercury’s Florida and Washington, D.C. offices. Susie is a veteran political strategist, with more than 25 years of experience in political strategy, government relations and public affairs. In addition to working with Mercury’s Florida and Washington D.C. teams, Susie has also launched Public Strategy Advisors, a new company focused on electing Republicans across the country.

Susie has spent decades working to recruit and elect conservatives at the federal, state and local levels. She has also represented multinational, national, state and local clients before the federal and Florida governments. She currently chairs the Save America PAC. She has been recognized at the state and national levels for her communication and campaign successes.